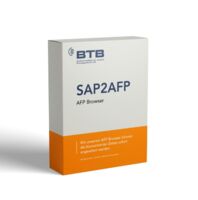 With our AFP browser the converted data can be viewed immediately

SAP2AFP is a data converter that converts print files in the SAP SAPF output format to IBM AFP format. It runs under Windows, UNIX, AIX and SunSolaris, and allows the connection of SAP systems to PSF print servers or to an output management system such as Control-D or BETA93. If the SAP system prints on a specially defined printer, the output file can be automatically sent to the target system via a TCP / IP connection and printed there with PSF.

To convert the print data, the SAP spool file is taken, translated and written to a temporary file. To transfer the print options, information from the spool file header of SAPGOF or OTF is taken and passed as parameters. These parameters can be recorded by a transport script and converted into the corresponding job parameters. The transport script can build a job that runs on the target system, fetches the converted file via FTP, and prints it via PSF.

SAPGOF (SAP generic output format) and OTF (Output Text Format) is the output generated by SAPscript; Typographic fonts are used, the text is placed on the page according to the character width. Examples are invoices, reminders, remuneration statements or other SAP documents created with SAPscript.

SAP2AFP vprocesses SAPGOF and OTF, the print data is directly converted to AFPDS (Advanced Function Presentation Data Stream), and SAP2AFP specifies the print options, which define how the file should be printed and distributed (eg copy number, one / two pages, recipient etc .) To the print server.